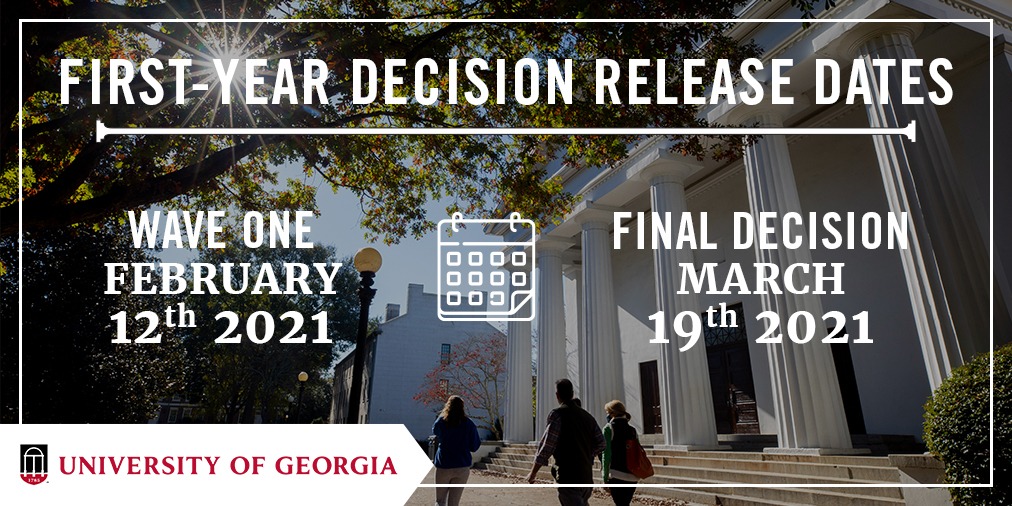 The final two decision dates for UGA freshman applicants are now set (unless some major issue impacts our office), with the smaller February wave of decisions will be released on Friday, February 12, while the final decisions in March will be released on Friday, March 19.  Decisions are all released in the late afternoon, but I do not have an exact time (so don’t ask me for one).

February Decisions – UGA will offer admission to a small number of applicants on Friday, February 12. This group of decisions is made up of only offers of admission, and if you were admitted, you will be able to see the decision on your Admission Status page (so only admitted students will see a decision change on their status page) and these admits will receive an email communication. Additionally, an admissions packet will be sent out in the mail the following week. Our office is too busy reviewing files for me to run any mid-range academic averages at this time, but the academic information should be very similar to the Early Action admitted students (it will not be exactly the same, as we had a large number of EA admits who were applying for our top scholarships, which slightly skews EA stats a little higher). My earlier blog post about Early Action decisions gives you more insight into the academic strength of this range of student. These admitted freshman, made up of mostly Regular Decision applicants, met the strong academic criteria of Early Action admission that we set for the small subset of EA admits where the decision was based on academic information.  If you remember from my earlier blog post, we made roughly 8,000 admits in EA, with one group being based on extremely strong academics alone, while others were admitted based on a whole student review looking at both their academic and co-curricular strengths. Since we are not finished with our whole student reviews for the entire applicant pool, we will hold off on decisions based on the these until March, as we need to understand the overall class before making final decisions.  Do not panic if you are not admitted with the February group. We are still very much in the midst of carefully reviewing documents and data on a great many more files, and there are still lots of decisions to make in our final group.

March Final Decisions – On Friday, March 19, all final freshman decisions will be released. There will be three decision groups (Admit, Deny and Wait-List), and I will try to post some information on all three of these decisions during the week leading up to the final decision release. We will also have a small group of freshmen that we will admit for the Spring 2021 term. We are still deep in the holistic read process, and I do not have any numbers on how many final admits we will make, what the statistics will look like overall, or how many students will be put on the wait-list. When we do release final decisions, I will have statistics on the overall applicant pool and admitted group the following week, but not broken out into the different release dates. After we make final decisions, we will continue to offer scholarships through late March, so please be patient as we do these reviews as well. Thank you for your patience during this review process.

Transfer Applicants – We will begin reviewing the Summer and Fall transfer applicants in February, and we will release the first group of transfer decisions in March. We will release transfer decisions every Friday after the initial decision group. All applicants with a decision will receive an email alerting them to a change in their status, so you do not need to constantly check your admission status page. We generally review transfer applicants by term first (so summer decisions before fall if possible), and then roughly by the date the file becomes complete. This is not exact, as some transfer files are more complicated than others to review. As such, please do not compare application date to release dates with others, as it might vary due to other factors (included days when several hundred applications were received/completed).