Fifteen plus years ago, I did a presentation at a local library just north of Atlanta for a parent group, talking about admissions in general but also going into detail about the UGA admissions process. The room was full of eager parents waiting for a glimpse behind the curtain of admissions (not exactly my plan, but that is what it felt like). Prior to me giving my talk and taking questions, the organizer of the event introduced herself and let the audience know of her college knowledge. She stated that her son was admitted to a prestigious university (insert whichever top 20 college you wish here), and that the reason he was admitted was due to her insistence that he play the tuba in high school. The subtle message was that while other students were playing standard instruments like the saxophone or clarinet, her child was playing a unique/unusual one, and that made him jump off the page. Why do I still remember this story? Two reasons. First, I always wonder if her son really wanted to play the tuba, much less any instrument, and if he still harbors some resentment about the decision that was forced on him. Second, I always wonder what that college’s admission office would say about the assumption by the mom’s statement.

When I read admissions files, it is always interesting to see an applicant try something unusual, but it does not then cause that the student’s chances of admission go up. I recently tweeted about the growth in beekeeping in schools, but that does not mean that being a part of the high school beekeeping club is now the golden ticket to admissions at UGA-It just means it was an interesting fact.  If you ran out and joined the beekeeping club just because of my tweet and now hate it due to having been stung multiple times and looking like the Stay-Puft marshmallow man, I am giving you the okay to quit. The challenge we see in admissions is that many times, both students and parents confuse correlation with causation. They see that an accepted student played the tuba or was captain of the beekeeping club and assume this was the cause of an acceptance, when instead it is just a simple correlation. The original student was not admitted due to playing tuba, but instead was admitted due to their overall strength as both a student and a person and it just so happened that they played the tuba.

In two weeks, we will be releasing final decisions. Immediately afterwards, there will be a flurry of tweets, blog comments and mentions on chance me sites, all trying to figure out why someone was or was not admitted. There will be wild theories flying about concerning geographic locations, high schools, test optional choices, gender, race, alumni history, etc., all trying to make a correlation into a causation. Instead of looking at the information we share concerning what we look at in our admissions review, the discussion turns into a search for any possible correlation/causation. For days after our decision release, I will refer people to what I have said about the important factors we look at in admissions (causation factors) such as grades/grade trends, core course rigor, dedication to activities, etc., and let people know the factors we don’t actually use in our decisions, no matter what their friends and neighbors say. 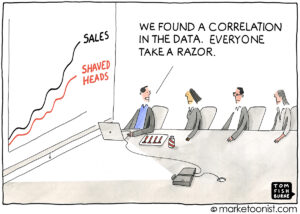 One of my favorite books (and later movie based on the book) is Moneyball by Michael Lewis. It is the story of the Oakland A’s baseball team and their General Manager Billy Beane. Due to a number of factors (mostly financial limitations), Beane must focus on what factors actually impact the outcome of a baseball game and not be distracted by the old methods of evaluating baseball players. In the movie, Beane’s data analyst states it clearly – “Your goal shouldn’t be to buy players. Your goal should be to buy wins. In order buy wins, you need to buys runs.” Beane has the A’s look at factors that actually buy runs and cause wins such as on-base percentage, walks and pitchers inducing ground balls, while devaluing the data that does not, such as base-stealing and bunting. To bring it back to admissions, focus on the information that colleges indicate are the causation of acceptances, and less on the factors that are just simple correlations.

When dealing with college admissions, my key suggestion is to look at what the admissions office says they value in their review, and focus on that information in your understanding of decisions. In addition, look at the overall picture of the admissions situation for the individual college and that specific year, as the applicant pool changes every year. We received roughly 11,000 additional applications this year, and that will definitely impact our acceptance numbers. On the flip side, this is the first year we have accepted the Common App, so we expect that percentage of students accepting our admission offer will go down (sometimes called yield), thus also impacting our acceptance numbers.

Remember, don’t focus on the tuba, the stork population in Germany or the people with shaved heads, as they are simple correlations, not causations. Focus instead on the information that actually impacts/causes an admission decision.

I hope this helps, and Go Dawgs!